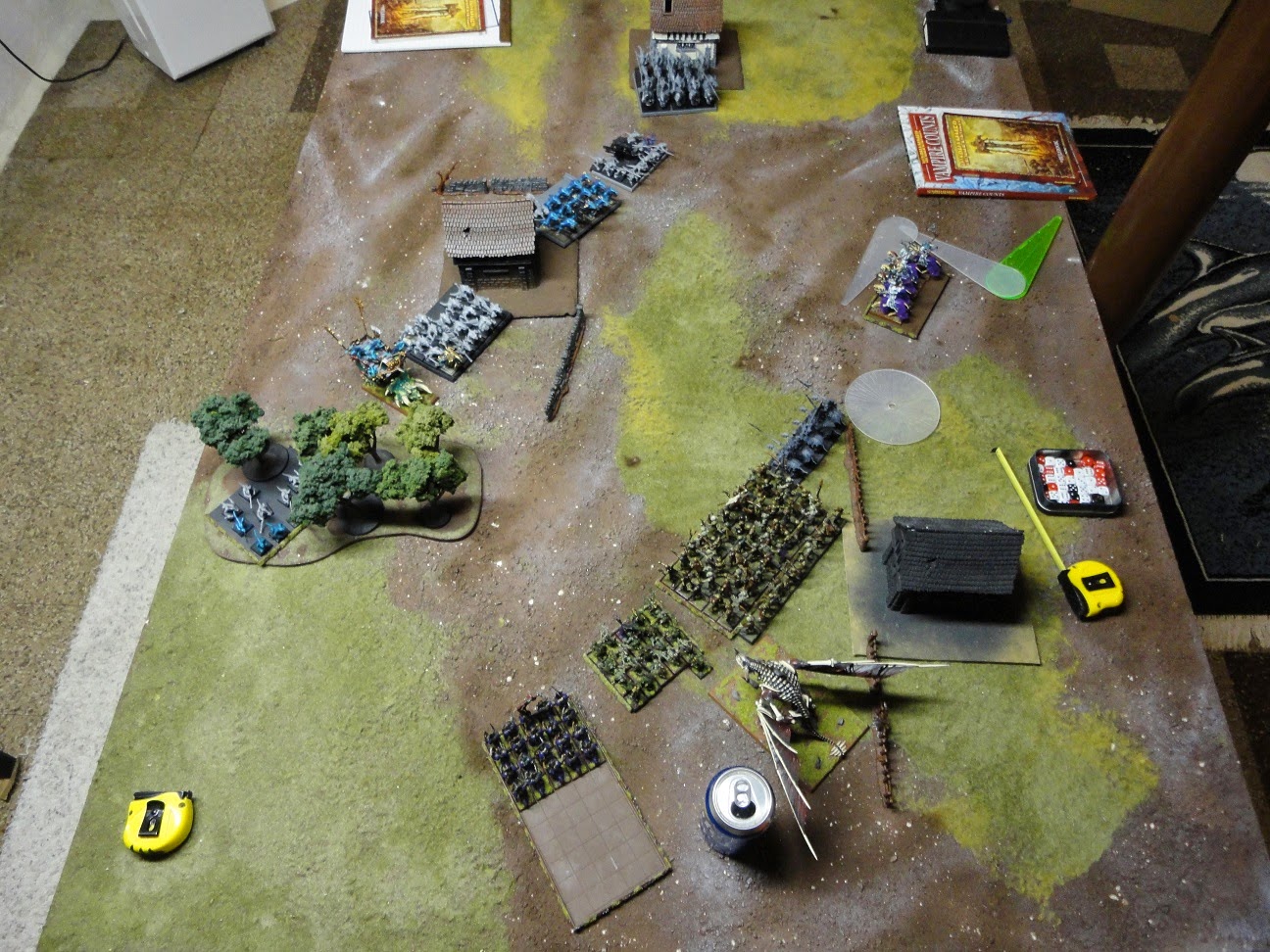 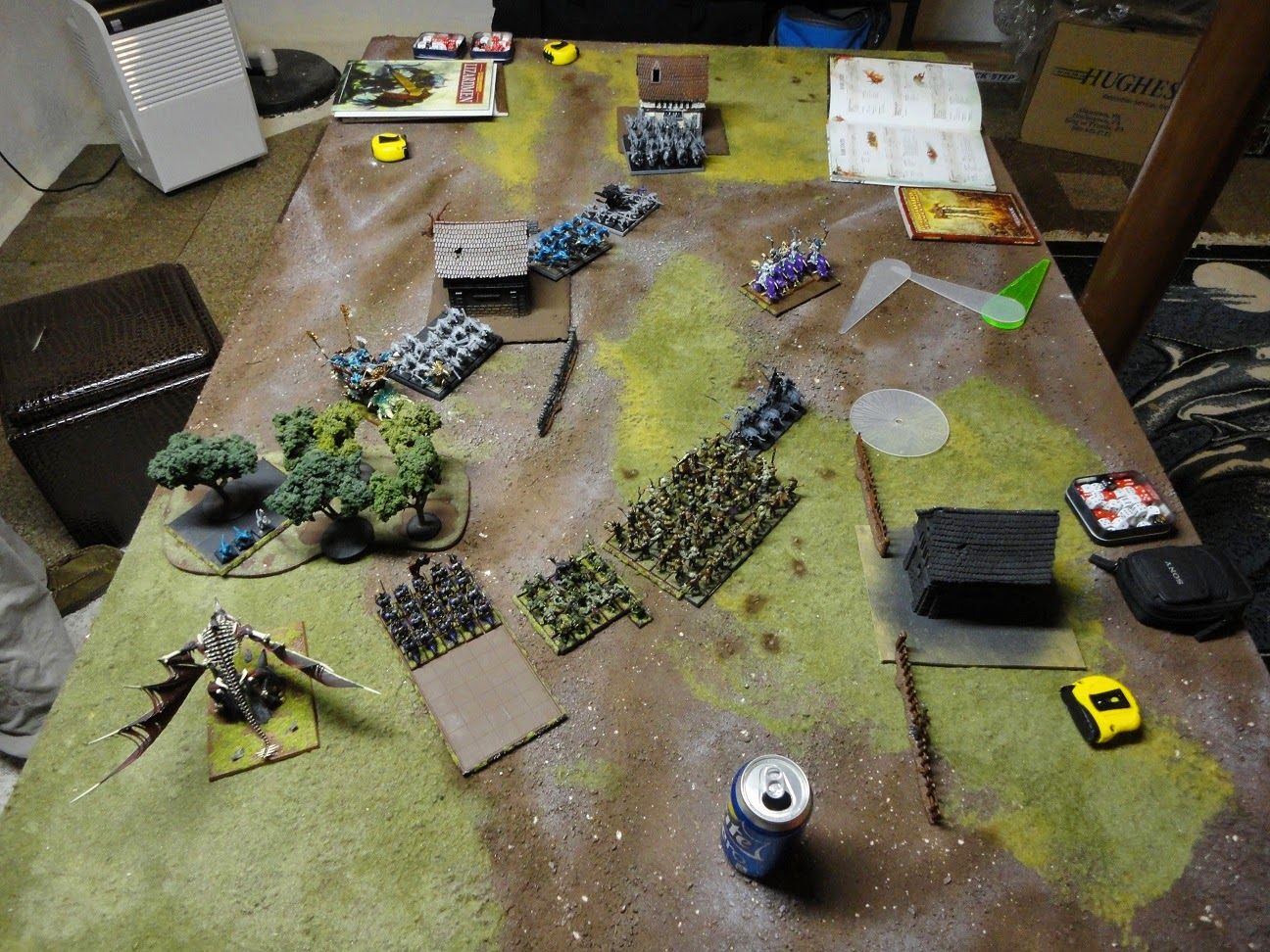 Vamps turn one: mostly moving up trying to stay away enough to give it a good chance the lizzards would fail charges. Also the terrorghiest screeched at the skinks with poison blowpipes killing a lot of them and running them off the board. 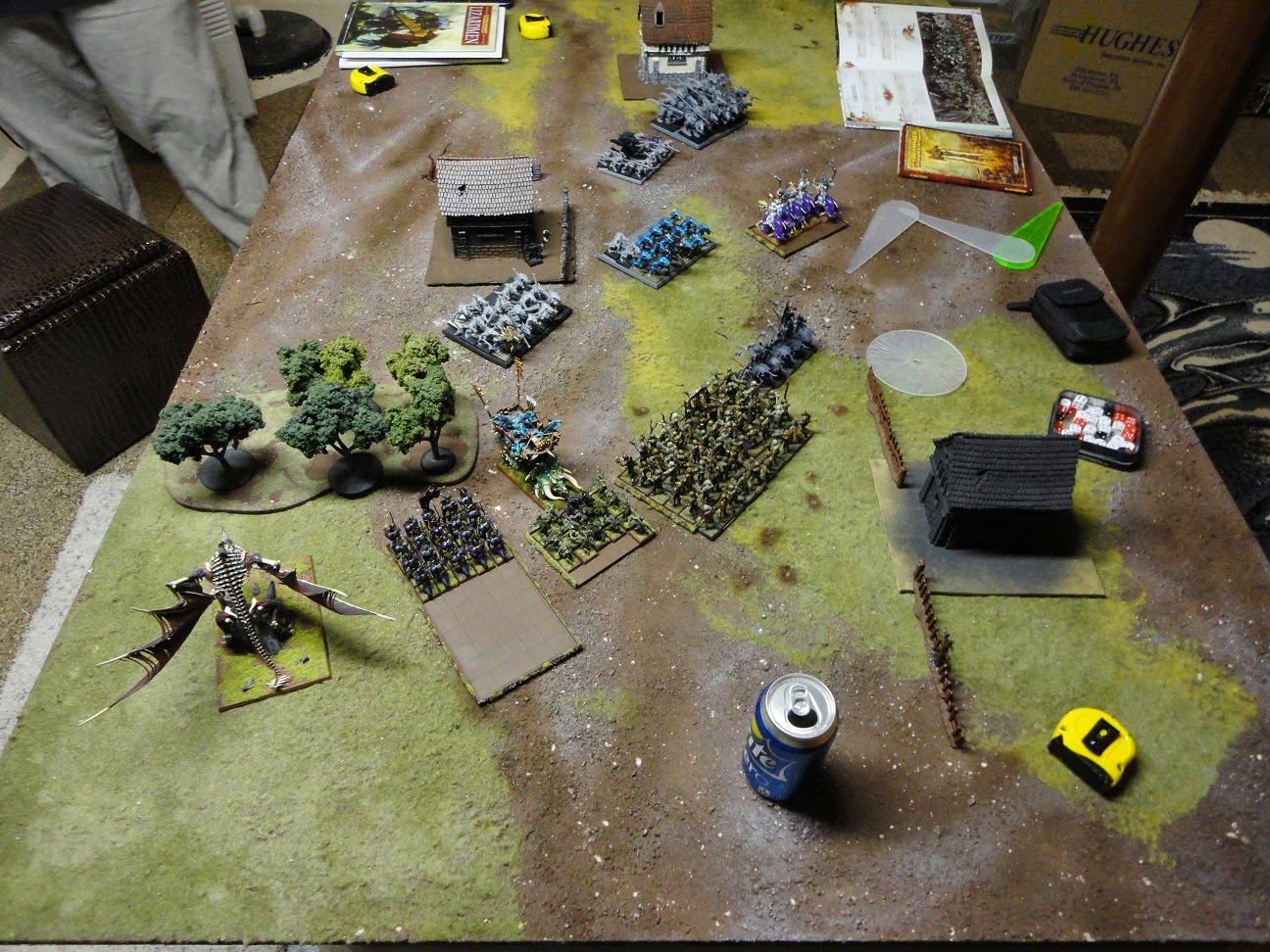 Lizzardmen turn one: there were several failed charges includeing one that needed about 3-4 inches to make it work... 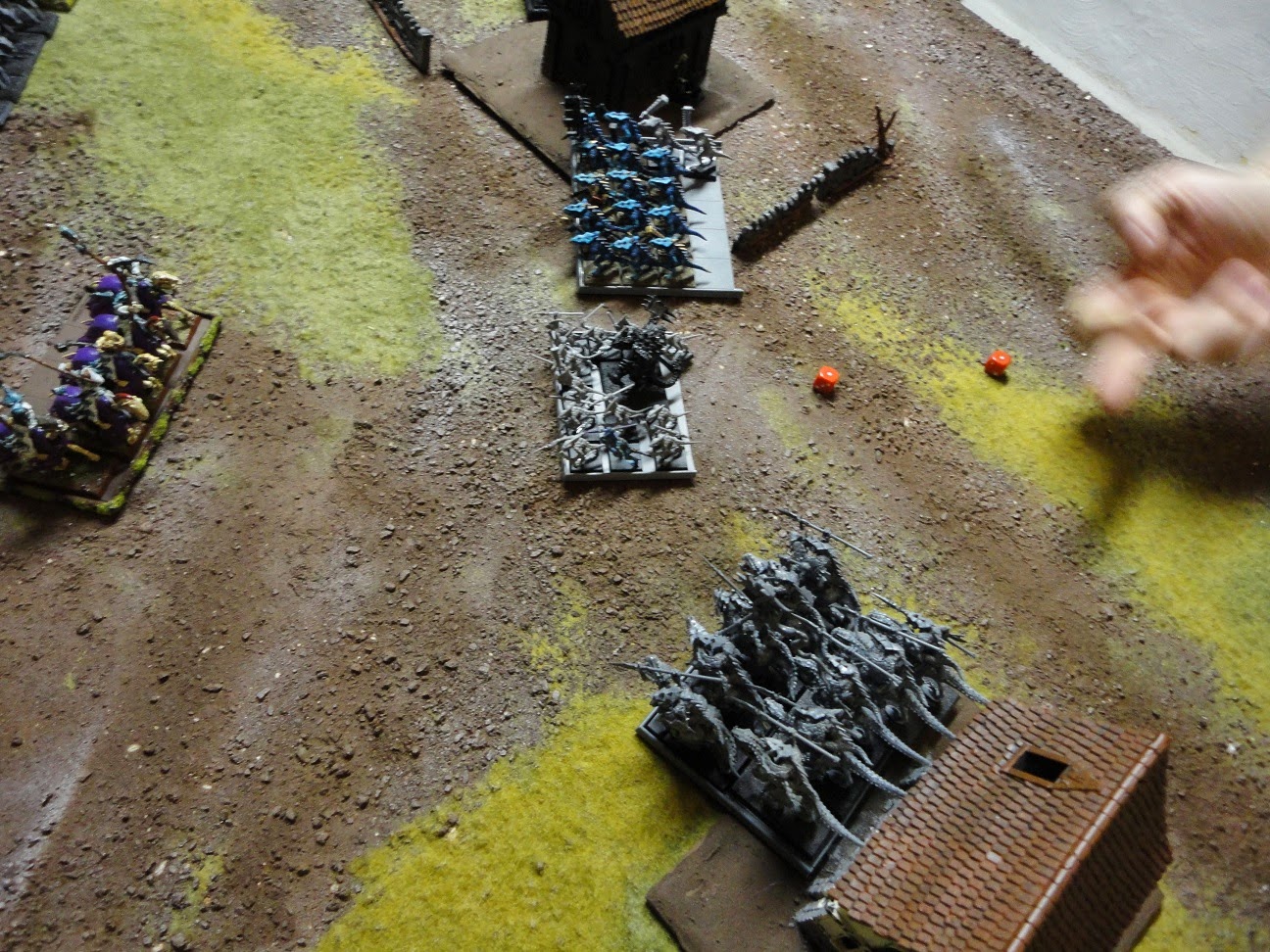 but due to horrible rolling did not work out. Worse then that the one charge that did go off on the opposite flank was the steg who them rolled poorly on impact rolls and was in turn chopped almost to death by my vampire lord. 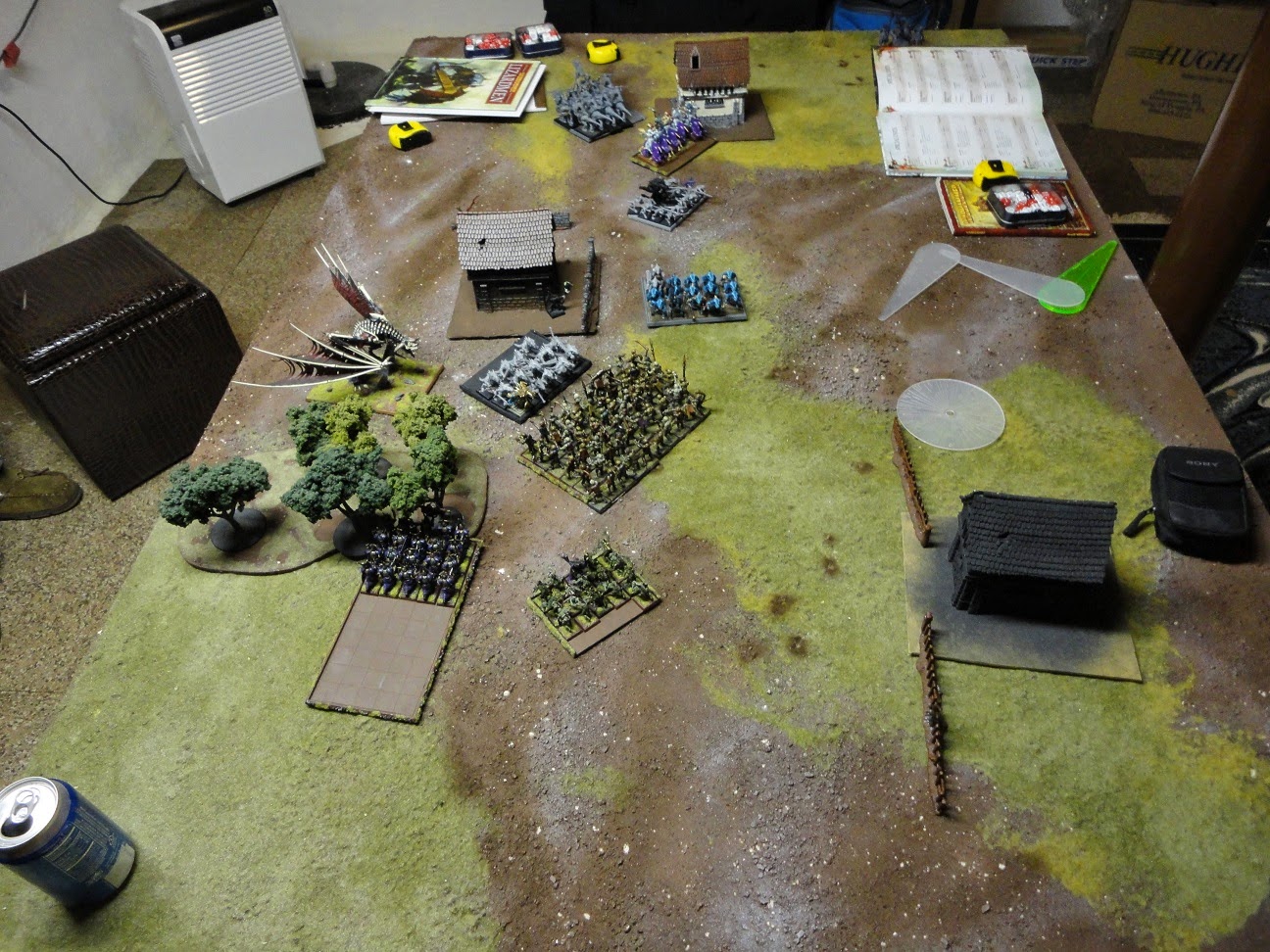 vampire turn two: my lord and his units of ghouls finished the steg off easily  and the rest of my army move up to block or prepare for the next turns charges on the left flank. on the right flank my hexwraiths charged the lizard cav killing enough to win the combat by a small margin and some how the lizards failed there moral check and started to run... so now I broken the moral of two lizard units not likely but still it happened. 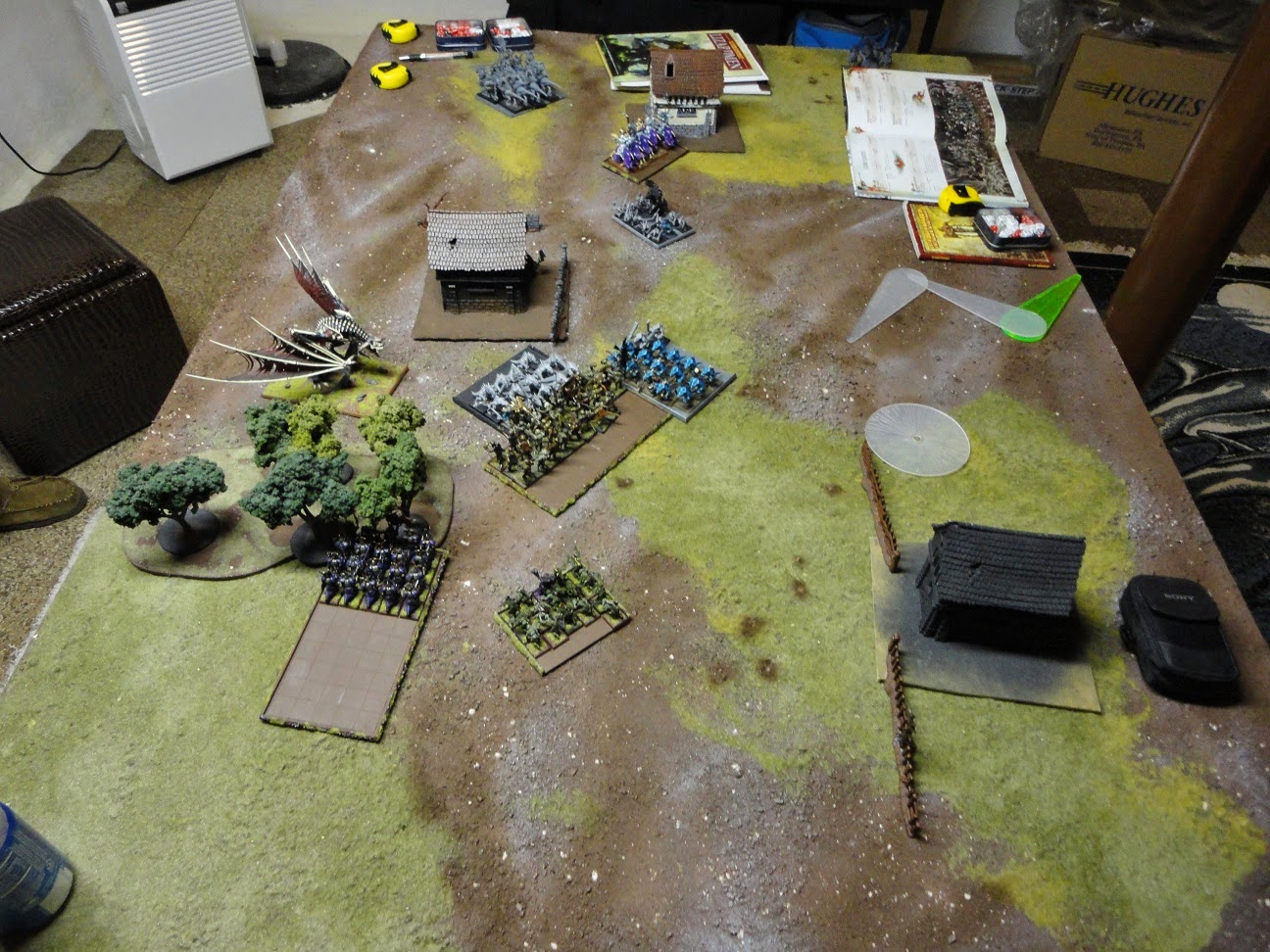 Lizard turn two: his cav somehow failed there moral again and kept running.The dice were just not going his way this game.  But he got in and started wiping out my big block of zombies seance it was in the way as I had intended . 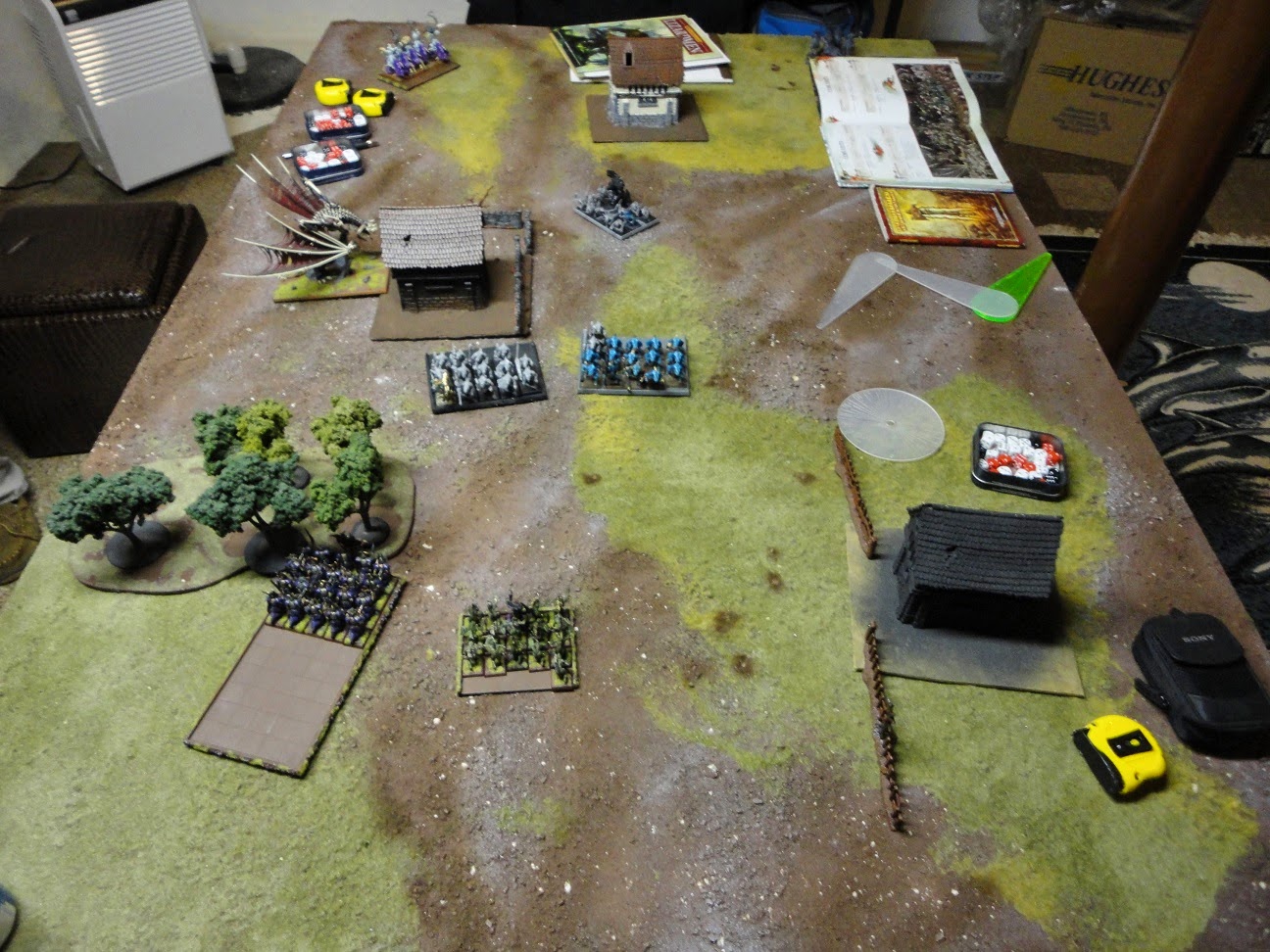 Vampire turn three:  My hexwraiths ran down the Saurus  cav but putting them selves well out of the fight for some time. the terrorgheist screamed at the skink priest and killed him. and I lost the last of the zombies to the saurus warriors sadly they could not last at least past this turn to save me from getting charged on his turn. 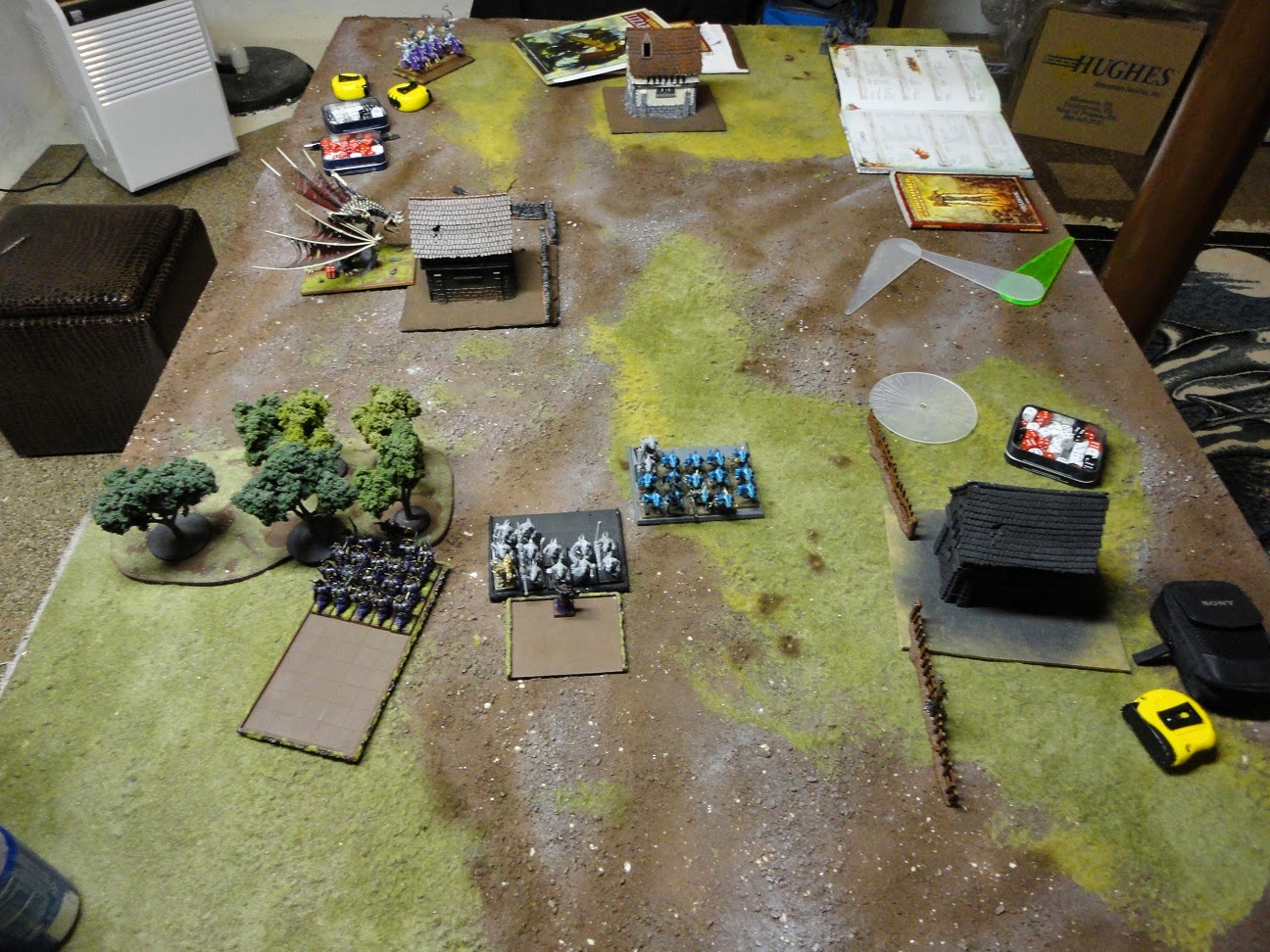 Lizard turn three: The saurus warriors made a nice long charge and devastated the ghouls but left the vampire lord unharmed. 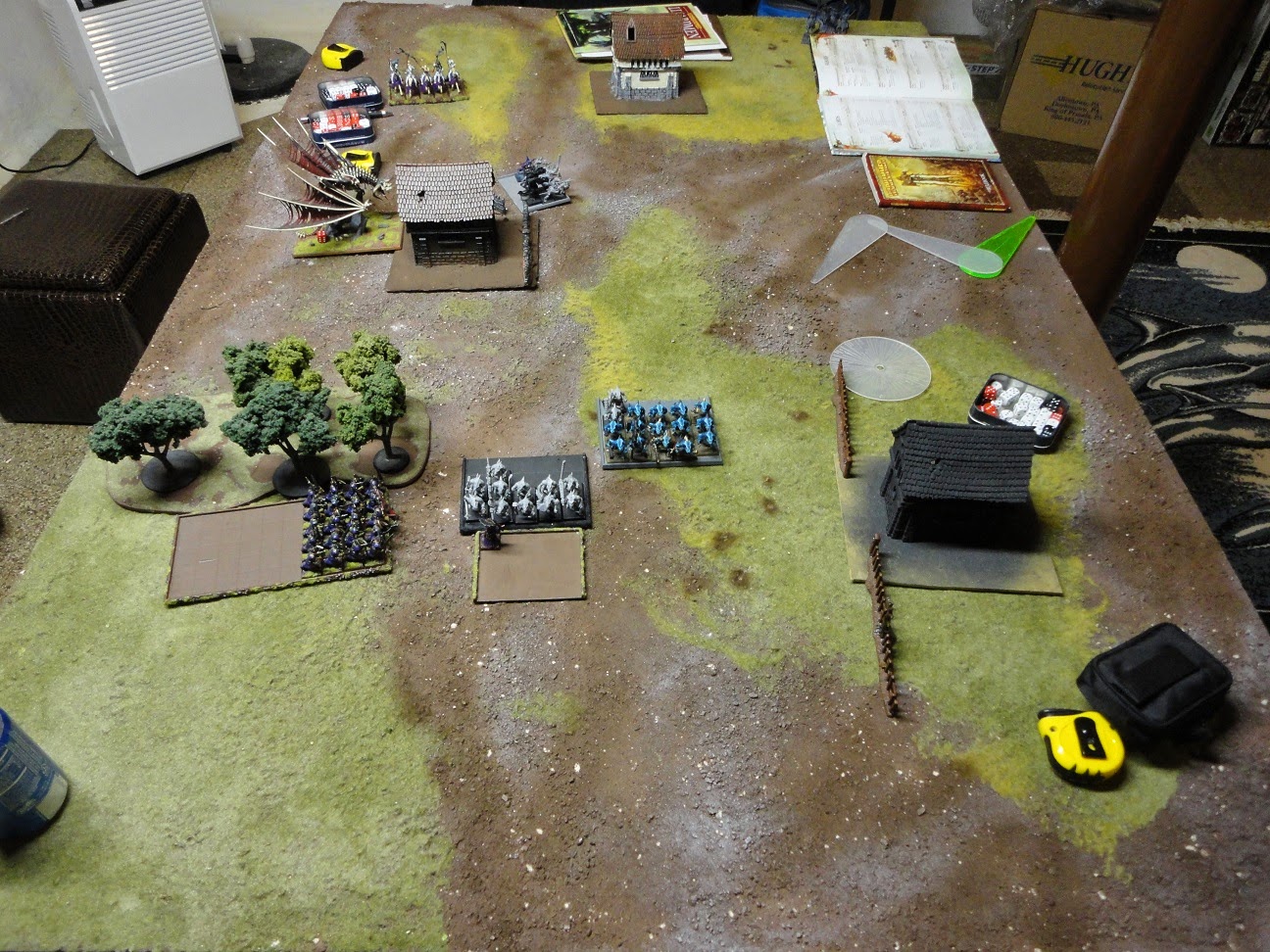 Vampire turn four: The lord killed the lizardman hero in a challenge 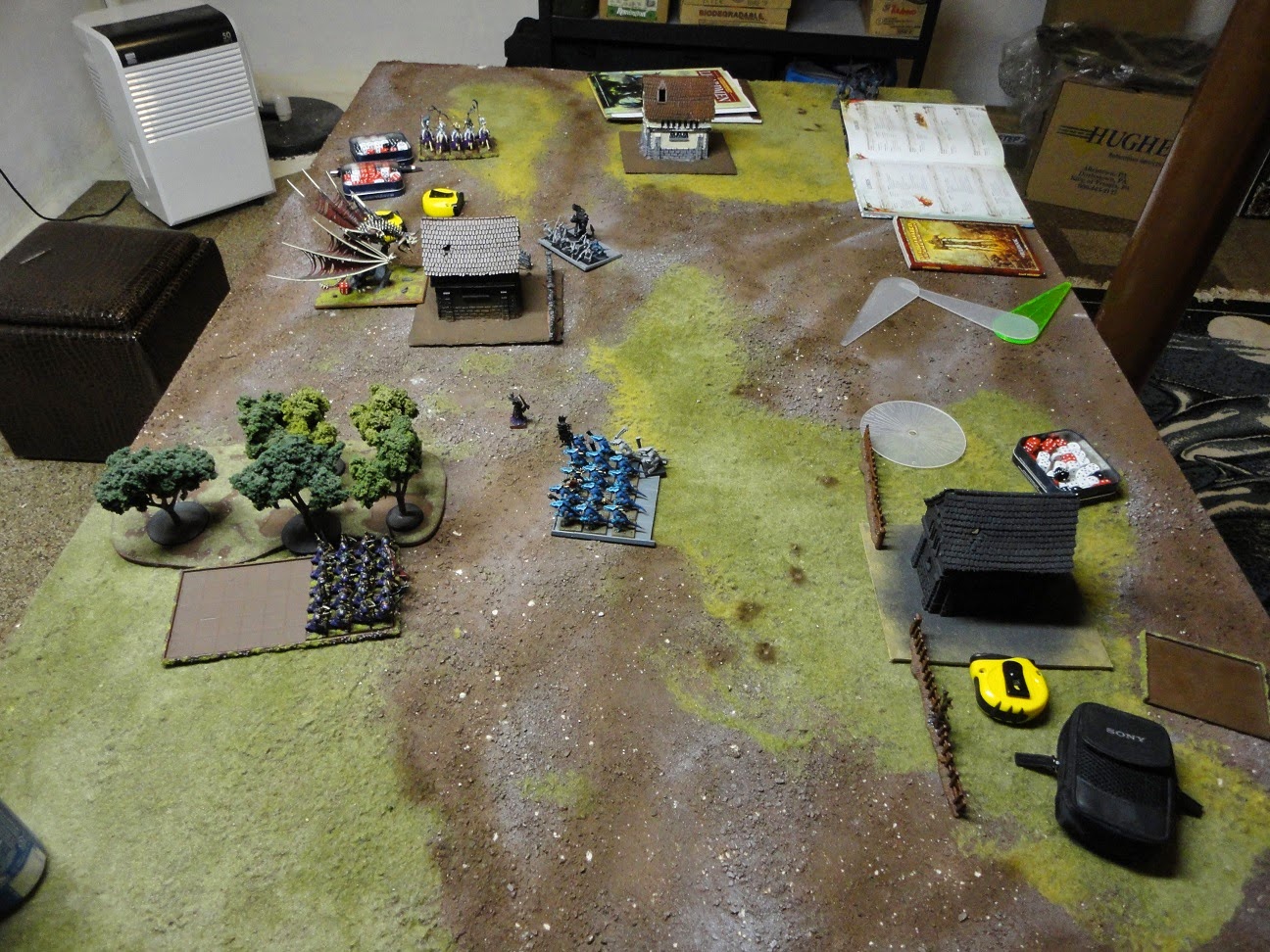 Vampire turn five: I seem to have lost the lizard half of this turn but mostly it was just an exchange in the back field between the terrorgheist and the skink cohort with the terrorgheist coming out of top by the end of my turn. Also due to the length of the charge needed I just moved up my grave guard to block the saurus and set up for the vampire to hit them 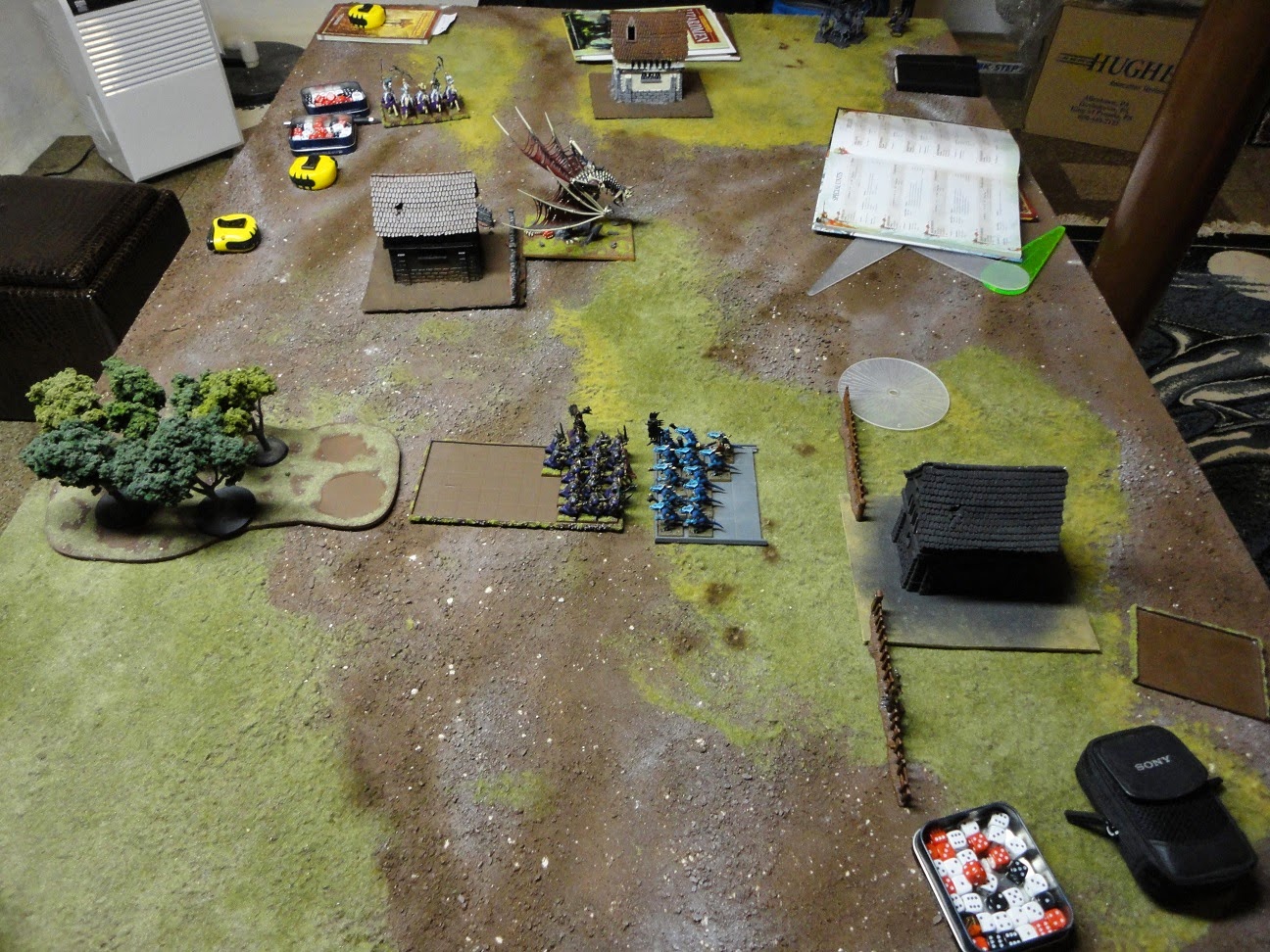 Vampire turn six: lost the lizard turn half again sadly but the graveguard and vampire won the combat om my turn to finish off the last Lizzardman on the table. 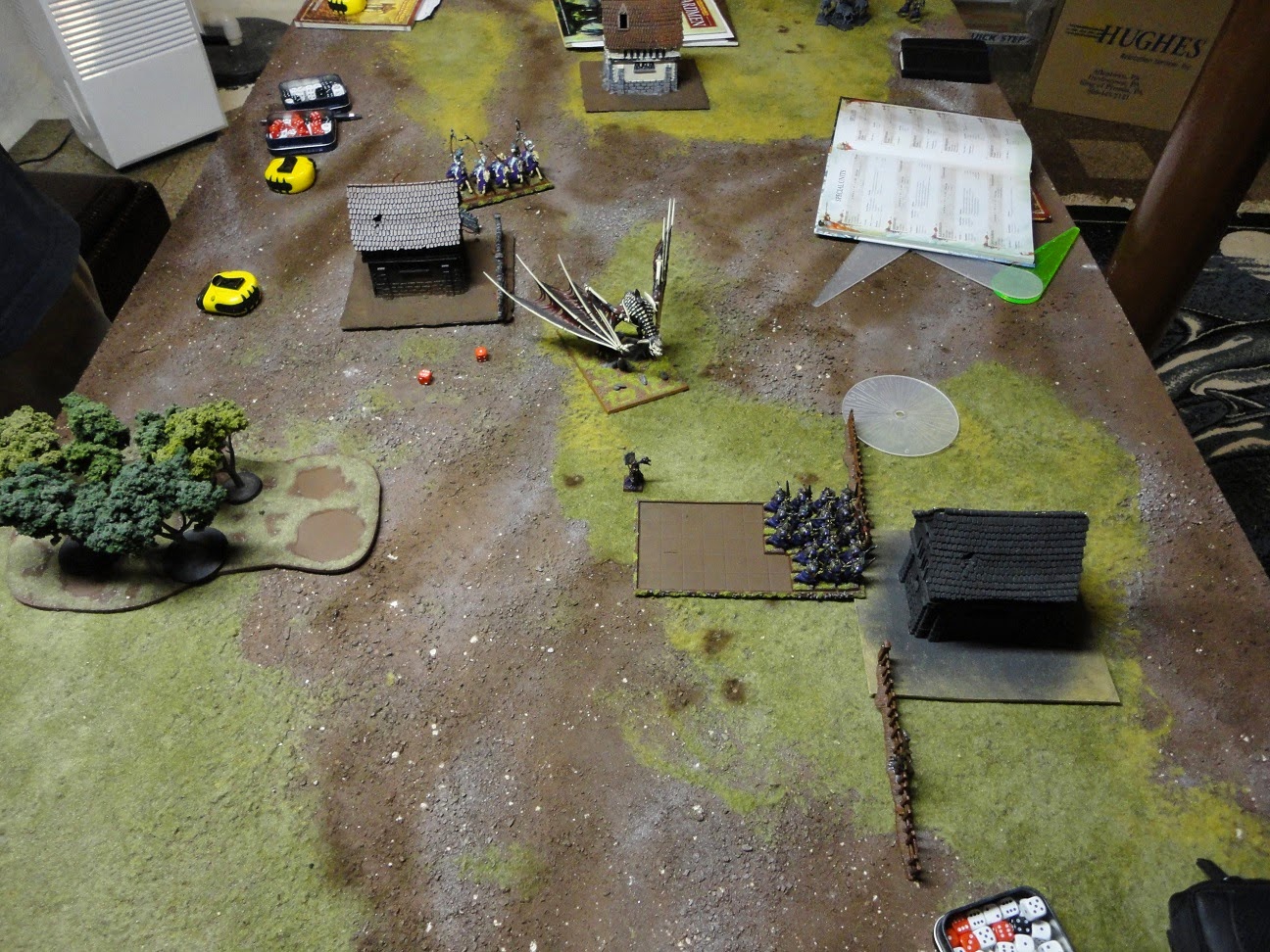 So this was the first time I have won with my vampires in a long time. And I learned what most vampire players take for granted... A tolled up lord can rampage in close combat you just need to be playing at high enough points to take the items and skills needed to get him the re-rolls to hit , a +2 str weapon(or if you have points +3) also some red fury to add attacks.
Posted by Turiya64 at 1:00 AM