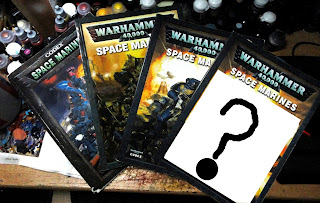 I don't normally post things like this but there are finally what I would call solid rumors for a new codex Space Marines. So I thought I should see what is going on and give some thought to what is in store for my personal army.

176 pages is rather nice 32 more than the last book 96 more then the 4th edition book and I believe 122 more then the 3ed edition codex. If you are like me and enjoy reading your army book time and again for the whole edition, bigger is better and will have more fluff then ever before. Count me in.
Robin Cruddace is writing it I know there is a lot of hate on the internet for him due to the tyranid codex but http://40kaddict.blogspot.com/ keeps doing just fine with the book so there is no worries on my end about him, also he did codex: Imperial guard and that book is just fantastic.
Ultra Marines on the front for the 3ed time in a row... I would have preferred a switch but I do suppose they are the standard for codex adherent chapters so it makes seance from that standpoint.
58$.... getting silly expensive for the codexes any more but this is my army so they will get my money for this one.

65$ for a tank that shoots flyers and not much else from what I understand.... that would be  something I will pass on. I prefer units that have more then one function in a Marine army so if it only shoots flyers I am not interested.

I bunched these 2 together seance the thoughts on them would be the same just about. I should be set on command models I just finished painting my 2ed power armor  Librarian I have a Chaplin with a jump pack and a Terminator Chaplin painted lysander painted and a power armor captain with a relic blade on a bike all ready to go. So I don't see a need for personally for either kit.
but from a value point of view Gray knights strike squad is basically a 5 man librarian kit for 3$ more then this new kit 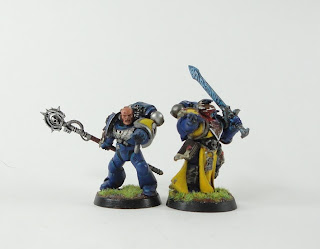 The guy on the left is what I made from that gray knights box tho I did use some standard marine legs and chest plate.

I will have to see them to really decide but for now I am leaning away from these. Also 78$ is steep so that is kind of a turn off. They will have to look amazing to get my hobby dollars

Slight price bump I can deal with that. Supposedly they are an all new kit if they look good it would be a short jump to get me to buy them even tho I have little need for more Tactical marines.


If this kit comes with lots of combie weapons and they models are new but on par with or better then The current sternguard I will need to get a 3ed squad at some point.... I know I am weak but I have a thing for sternguard.

These confuse me they are 5 dollars cheaper then the current Vanguard vets and 10 cheaper then there sternguard brethren and rumor is that they are both plastic kits. It's still 80$ for a full squad but if they are good looking and I am sure they are I may add them in to my army at some point in this edition.

All in all it looks like that army will see little change from the last edition and I am fine with that  as an army we have great model support there will be little to no fine cast left if the vets both get new plastics and if there are some small tweets to rules for some of the weaker units (I'm looking at you assault squads) The book will continue to be the yardstick by witch other books are measured.
Posted by Turiya64 at 6:55 PM