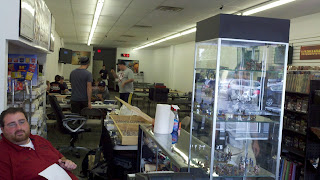 After being essentially homeless games store wise for the last 2 years or so I finally have a nice place to get in some games. This store just opened about 15 min away from where I live. http://www.sggamesandhobbies.com/ is a place made by gamers for gamers. The owner matt (bottom left in the picture) is both friendly and enthusiastic. He started this stores because around Philadelphia Pennsylvanian there are few options for playing tabletop games.

Games workshop way down in the north east of Philadelphia witch has 3 tables and is cramped into a small strip mall so if you are not there at a very off time you cant even walk around there are so many people cramed in and don't even think about getting a table to play at peak times.

The other options consist of about 2-3 comic shops that carry a bit of games workshop's products and at most have a few 4' by 4' boards witch is fine for small games but leaves no options to go beyond that and at least speaking for my self they were all at least 30 min drives.

Stomping grounds On the other hand is huge this picture does it no Justus there are six 4'/8' gaming tables up at all times with at least 10 tables for the magic the gathering players. I have been told that they could host at 56 player magic tournament with out disrupting the wargaming tables witch by the way are spaced generously from eatch other so that you wont be bumping into the players from the next table (very nice around hear as we have a lot of bigger players). They can also add at least 6-10 more wargaming tables if there is need giving them a max of 16 8'/4' tables . if  you where to do a 1000 point event that means to could potentially have 32 games going at one time!

i actually got in 2 games the other day one with the owner matt VS his guard army and one agenst the guy that will be running the tournaments at the store and his Orcs. I ended up in a tied game when facing the guard. If it ran for any more turns it could have gone ether way but lets just say that the sternguard in there landraider performed rather well and were still at full power charging the remaining guardsmen but there were at least 9 melta gun toating vets that wanted a piece of them.

In the second game I faced Orcs for the 2ed time ever and it was a blast even tho my dice hated me for most of the game. I got rolled hard in this one. My bikes, sturngurad, landraider and my dreadnought in a drop pod all got killed early after failing to kill a single model in shooting if they could have destroyed a single battle wagon and allowed me to charge its contents it would have been a different game. But dice are what they are and the guy I was playing was really honestly sorry to see the game go so badly for me. It's nice to play games with people who care so much about both players having fun. After all that is why I do these things in my free time to relax and enjoy my self.

On the flip side they are planing on running a tournament about once a month and that is supposed to be rather cut throat and I am interested in attending that as well even tho I will miss the first one due to previous obligations. I am going to make an effort to get to the next one and hopefully i will get some pics to bring back hear as well.

So if you happen to To live close to Philadelphia drop by stomping grounds its all you could possibly ask for in a wargaming store.
Posted by Turiya64 at 1:00 AM