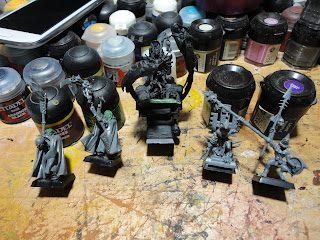 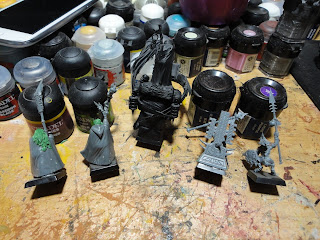 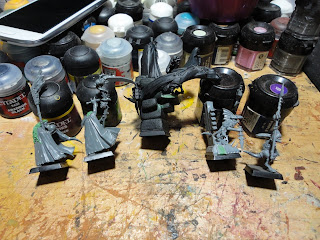 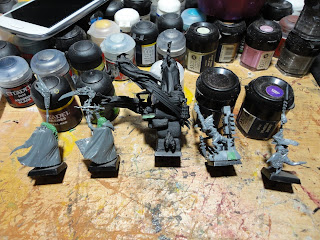 Today turned into a day of modeling after I opened my bits box. The lizard man skinks were from the Stegadon kit I never used ether the chieftain or the priest when building it so I set them up to play on there own.
The chieftain was easy I just glued him to the base nothing exciting there but he still looks cool.
The Priest I had to trim down the throne so that it would fit on the little base and reset his tail so that it would fit with the back of the chair so much closer to his body.
The two necromancers on the left are empire wizards I got back before the plastic necromancer kit came out for the vampire counts. I tried to pick bits that would fit the feel of necromancers but non of the heads were exactly what I wanted out of the box so the hats had to go and I tried my hand at adding hair more fitting.
The necromancer in the center I did a wile ago and posted it on bell of lost souls but he was never posted on this blog and I was never 100% happy with the stones under him there texture and shape just was not sharp enough. There is only so much I think I can do to seance the green stuff is hardened but is did trim the front of the bottom stone as it was by far the most rounded then I cut a few large gashes into it to give it texture. I think I will need to try my best to paint some extra texture when I take on painting him. Oh just so it is clear when he is played he will be my master of the dead so I thought he should be suitably ornate.
Posted by Turiya64 at 1:00 AM